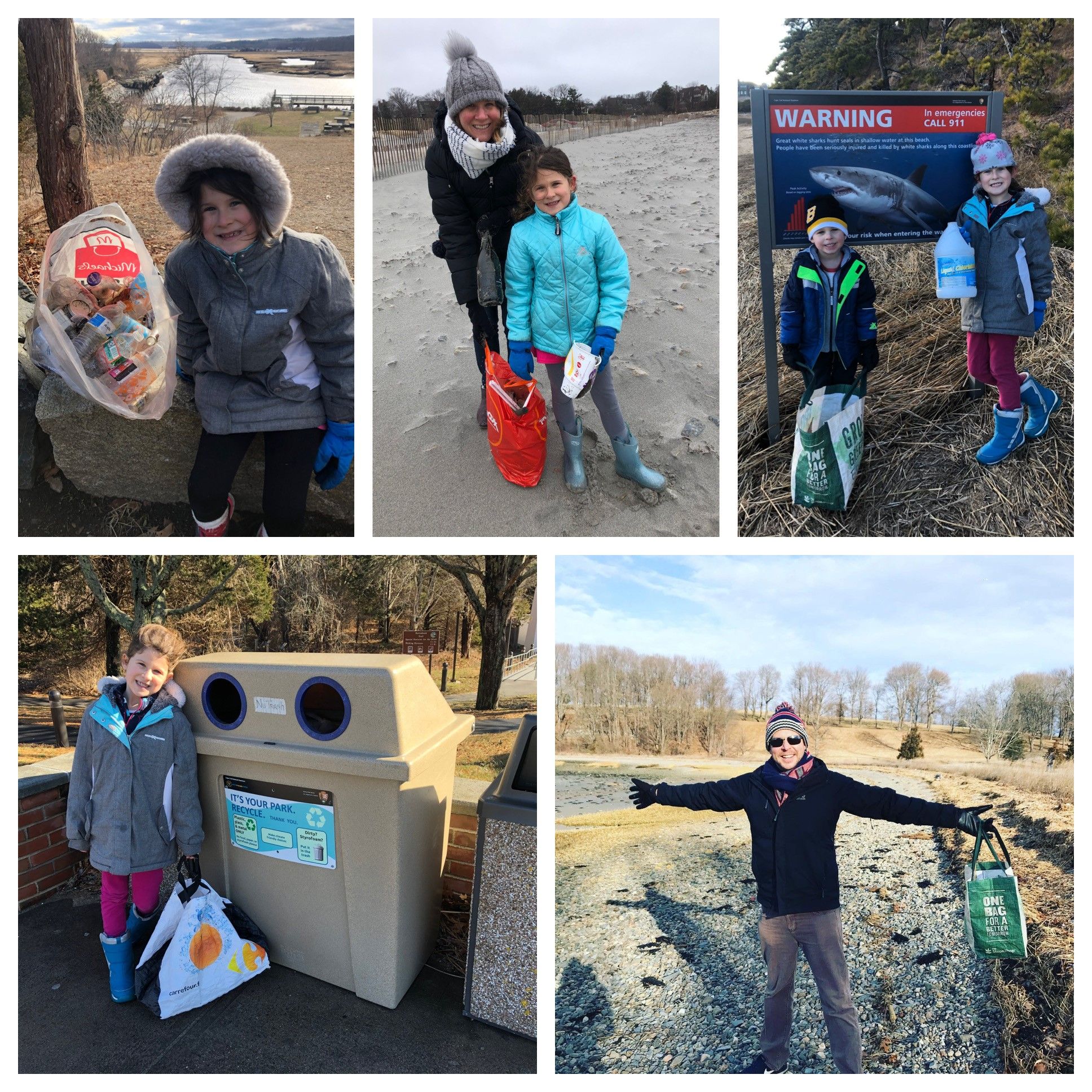 Last year, the Burgess family relocated to Cohassett, Massachusetts from England. Once they settled into their new community, they noticed that Massachusetts, like parts of their native England, has a noticeable litter problem.

Rather than simply complain about it or shrug it off, however, they decided to take action and do something about it.

“We’ve always been a family that picks up the odd bit of litter as we explore nature and we love setting goals,” says Sarah Burgess. “On New Year’s Eve, we were walking on Sandy Beach in Cohasset and we were filling a bag we’d brought with us to collect litter. It didn’t take long to fill it and my husband suggested that it could be a cool family project to try to clean up more litter in 2020. We also thought it would be good for our kids to get involved and help them see how they can inspire others through their own actions.”

The Burgesses set an ambitious goal of collecting—or inspiring other people to collect—2,020 bags of litter in 2020. By February 11th, they and their followers on Instagram had collected 262 bags across five continents, 12 countries, and four U.S. states.

Sarah Burgess was inspired to act after reading “How to be Alive,” a book by Colin Beavan. The book encourages people who find themselves in a situation they don’t like to do something positive to change it, rather than simply complaining. It doesn’t have to be a big project. Just one small action a day can make things better.

“The news about our environment is so depressing at the moment and if you read too much about the climate crisis it can feel overwhelming,” says Burgess. “But if you focus your energy on doing one controllable thing to make things better—for you, the people around you, or the planet—then you’ll feel better and you’ll make a difference.”

During the first two weeks of January this year, Sarah Burgess walked the beach and roads of Cohasset picking up litter and getting funny looks.

“I think people thought I was collecting for the deposits on cans and bottles,” says Burgess. “The guy at the town dump couldn’t quite believe it when I took all the recyclable cans in each week. I had to explain I didn’t drink quite that many cans of Bud Light!”

By mid-January, the Burgess s were up to 27 bags and 2,020 bags seemed such a long way off. But they kept going and as more people began to hear about their project, a few other families joined in on the weekends and posted their pictures on the Burgess’s @just1bag2020 Instagram account.

Word started to spread and now trash bags are being collected from Cape Cod to Virginia Beach and in the UK, India, Australia, and the Seychelles Islands.

Burgess ’s neighbor jotted down the words she heard her kids saying while they were out litter picking one day:

“It’s amazing to hear words like this come from young kids,” says Burgess. “They’re learning about their world and the impact humans are having on it. They see in real time the consequences of people’s actions and hopefully they’ll be more conscious consumers as they grow up.”

If you would like to join in and help the Burgess family reach its goal, simply grab a bag and collect any litter you see. Collect whatever you’re happy to pick up (wear gloves and make sure you wash your hands thoroughly afterward!). Some people do it on their daily walks, while they’re out shopping or doing errands, or when walking the dog.

Tell your friends and talk to your kids about why we need to clean up the litter we come across each day and why a clean, green Massachusetts (and planet) matters. Together, with small individual actions, we can keep Massachusetts and the entire world beautiful!