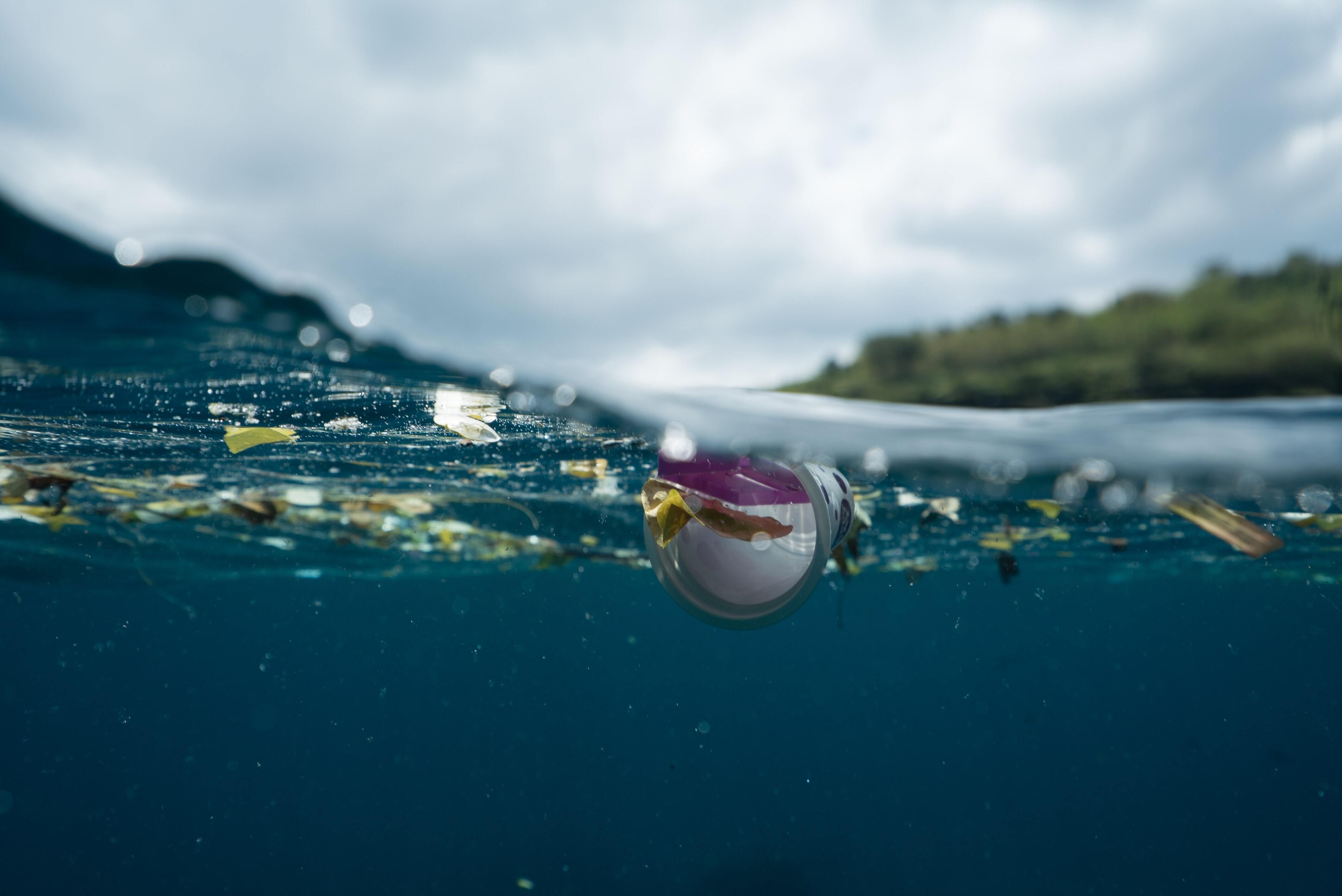 Marine pollution is a serious issue that is not going away any time soon. Some estimates project that the problem as it stands is so severe that by the year 2050, the amount of plastic in the ocean will equal the amount of fish. Plastic winds up in the ocean in myriad ways—most often light-weight plastic that was being transported to landfills or was littered can be blown into drains that empty into rivers and the sea. Scientists are now aware of the fact that plastic enters the ocean through over a thousand rivers.

After it has entered the ocean, it accumulates in something called gyres, which is a system of circulating ocean currents throughout the world. The Great Pacific Garbage patch, popularly known as “trash island,” is the result of one of these gyres in the North Pacific Ocean. The Great Pacific Garbage patch—located between Hawaii and California—is not the only garbage patch in the ocean, but it is the largest and the most well known. Contrary to common belief, the garbage patch is not an accumulated mass equivalent to a giant island, but rather a spread out collection of plastics ranging from large fishing nets to microplastics. The debris that make up the patch are dispersed over massive sections of the ocean’s surface and down to the ocean floor.

While some areas of the patch are made of large visible trash accumulation, a significant amount of the patch is made up of these microplastics, which are tiny pieces of plastic smaller than 5 millimeters that occur as a result of larger pieces of plastic slowly breaking down. Parts of the patch containing microplastic have trash so small that ships may sail through them and not even notice. Microplastics are particularly dangerous because they are so hard to clean up, and are often mistaken as food by various marine life.

This makes the Great Pacific Garbage Patch more akin to a garbage soup than a garbage island. Trying to clean up the patch is made more difficult by the fact that the debris is spread out and constantly being pushed by wind and ocean currents. If the trash was all concentrated in one place, as the trash island imagery suggests, we could simply go and scoop it up.

So, how did the Great Pacific Garbage Patch form? Our first knowledge of the patch started in 1990 with an ocean container spill that released around 61,000 sneakers into the ocean. It was soon realized that these sneakers would never float to shore. Instead, they would be stuck circling the ocean in a vortex created from both ocean gyres and the North Pacific Subtropical Convergence Zone, where cold Arctic water collides with warm South Pacific water. Most of the trash that makes up the Great Pacific Garbage Patch we know today comes from countries all around the Pacific Rim. It became gradually bigger and bigger as a result of increased land pollution, insufficient waste management, and increased fishing in the Pacific. Long story short, the patch is there because of us.

The patch spans an area twice the size of Texas, consisting of an estimated 1.8 trillion pieces of plastic and weighing approximately 80,000 tonnes. This weight is the same as around 600 Boeing 777s. The areas closer to the center of the patch are the most concentrated, but needless to say, the entirety of the Great Pacific Garbage Patch is highly polluted and dangerous. Leftover nets in this patch trap, entangle, and kill marine life. Many animals get wrapped in the discarded plastic left here, and mistake microplastics for food. According to a recent study, researchers found that 73% of deepwater fish had eaten microplastics. Not only does this severely hurt the animals themselves, these microplastics eventually end up on our dinner plates. Garbage patches can even transport non-native species from one place to another as they hitch a ride on the floating trash and then disrupt the new ecosystem they land in.

Although it is the most severe, the Great Pacific Garbage Patch is only one of five known garbage patches, all of which need our help. The garbage patch has not been cleaned up in part because it is in no man’s land, the space between nations, and a nation has yet to take on the responsibility and donate the funds to clean it. It is not a small task. According to NOAA estimates, 67 ships in one year could clean not even one percent of the patch. But that doesn’t mean it’s hopeless. In addition to cleanup efforts, it is also vital that we take action to stop the patch from getting bigger. That means reducing our current use of plastic drastically, and ensuring that the plastic we do use gets properly recycled. Prevention is just as important as cleanup.

Erika. (2022, April 22). Why the trash island is a misconception - the ocean cleanup. The Ocean Cleanup. Retrieved July 11, 2022, from https://theoceancleanup.com/trash-island/

Parker, L. (2021, May 20). Plastic gets to the oceans through over 1,000 Rivers. Environment. Retrieved July 11, 2022, from https://www.nationalgeographic.com/environment/article/plastic-gets-to-oceans-through-over-1000-rivers

Seeker. (2018, December 3). The Great Pacific Garbage Patch Is Not What You Think It Is [Video]. YouTube. https://www.youtube.com/watch?v=6HBtl4sHTqU