Help Support the Break Free From Plastic Pollution Act of 2021 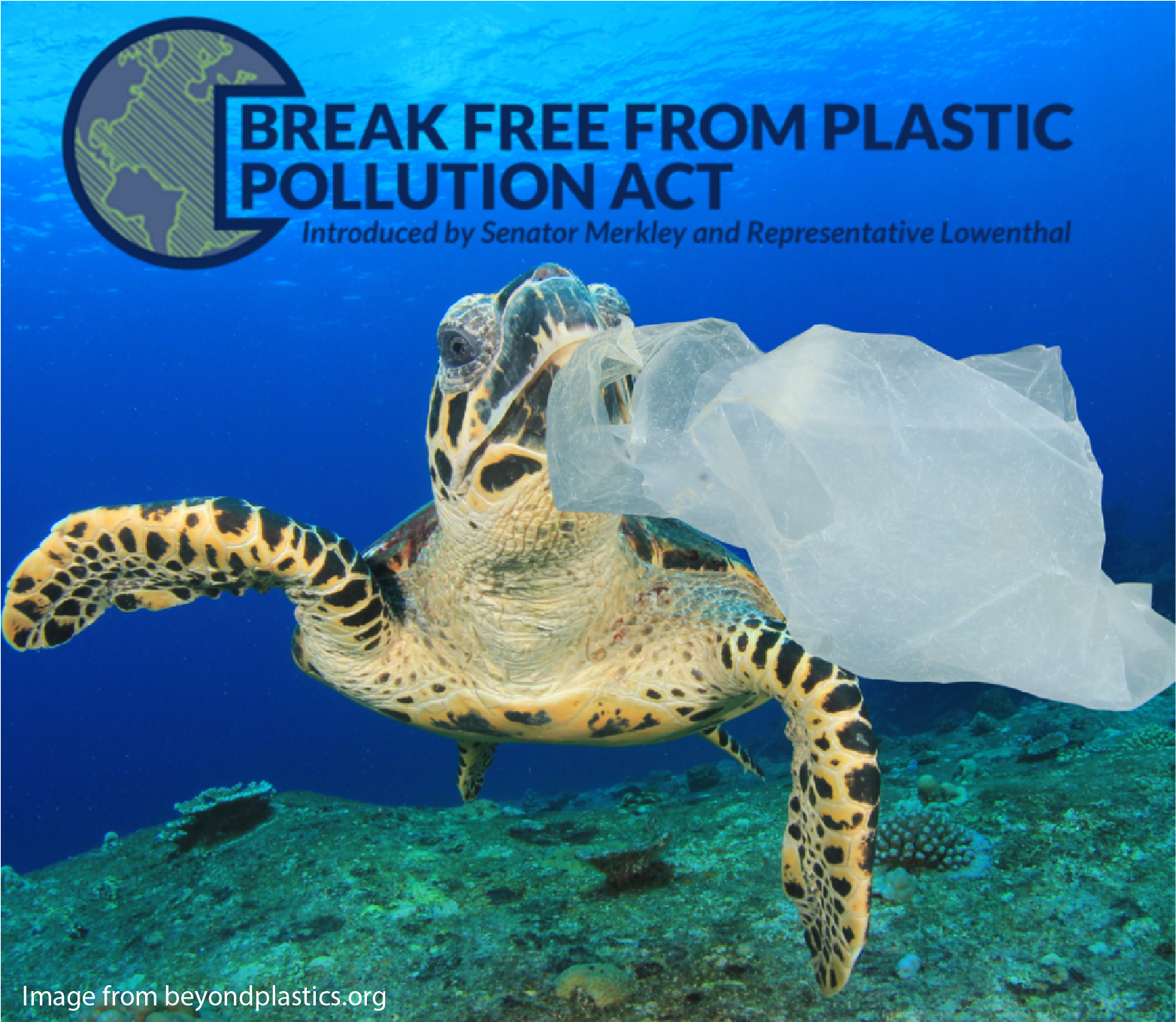 The Break Free From Plastic Pollution Act (BFFPPA) is a federal bill that seeks to address the plastic pollution crisis—a global danger and environmental justice issue that threatens the health of humans, wildlife, and our planet. The bill seeks to reduce the use of plastics and create a more sustainable future. It sets forth specific requirements for the handling of waste and recycling of plastics, as well as other materials. The original bill in its entirety can be found here.

In early 2021, an updated BFFPPA was reintroduced to Congress by Senator Jeff Merkley (OR) and Representative Alan Lowenthal (CA). This bill represents the most comprehensive set of policy solutions to the plastic pollution crisis ever introduced in Congress. It seeks to strengthen the environmental protections language contained in the original version of the bill to hold corporations accountable for the plastic they produce. It also includes more stringent measures to reduce plastic use, including prohibiting plastic carry-out bags and utensils. A PDF of the complete bill can be found on Senator Merkley’s website here.

Why Is This Legislation So Important?

Senator Merkley’s website states, “The average American ingests a credit card’s amount of plastic every week.” Every week. Senator Merkley states, “Many of us were taught the three R’s—reduce, reuse, recycle…But the reality has become much more like the three B’s—plastic is buried, burned, or borne out to sea.”

According to the website Breakfreefromplastic.org, “ninety-one percent of plastic is never recycled and more than 350 million metric tons of plastic are produced each year.” And the country that generates the most amount of plastic every year? The United States.

Breakfreefromplastic.org also states that, “The US continues to export 225 shipping containers of plastic waste per day to countries with limited or nonexistent waste management systems.” And the US is not alone in exporting plastic waste. Australia, Japan, Germany, and the UK are also large exporters of plastic waste to poorer countries that don’t have the means to properly handle disposal and often mishandle the waste, causing more plastic pollution to end up in our oceans, landfills, and incinerators.

Plastic-producing facilities are often located in low-income communities, communities of color, and Indigenous communities in the United States, making those who reside there disproportionately affected by plastic pollution that permeates their air, water, and soil.

Plastic production is also tied to climate change because the petrochemical industry makes plastic from fossil fuels, effectively contributing to climate change at every step of plastic’s lifecycle. Plastic is also in our oceans and affecting our wildlife. According to greenpeace.org, “More than 8 million tons of plastic enter our oceans every year, drowning wildlife and wrecking ecosystems.”

The 2021 BFFPPA contains bold steps toward substantially reducing plastics for a more sustainable and healthy future. Some of its most impactful additions include:

The BFFPPA also includes the following rules that would take effect in January 2023, assuming the bill becomes law:

For a fact sheet on these and other highlights from the BFFPPA bill, see breakfreefromplastic.org’s downloadable PDF.

Breaking free from plastic is the only long-term solution to our plastic pollution crisis. You can help show your support for the 2021 BFFPPA bill by contacting your members of Congress and asking them to support it.

Another very important and immediate step you can take is to start reducing your own use of plastics. If you’re not sure where to begin, take a look at our zero waste blog post series here and here. Together we can eliminate plastics and create a healthier and sustainable future for all.