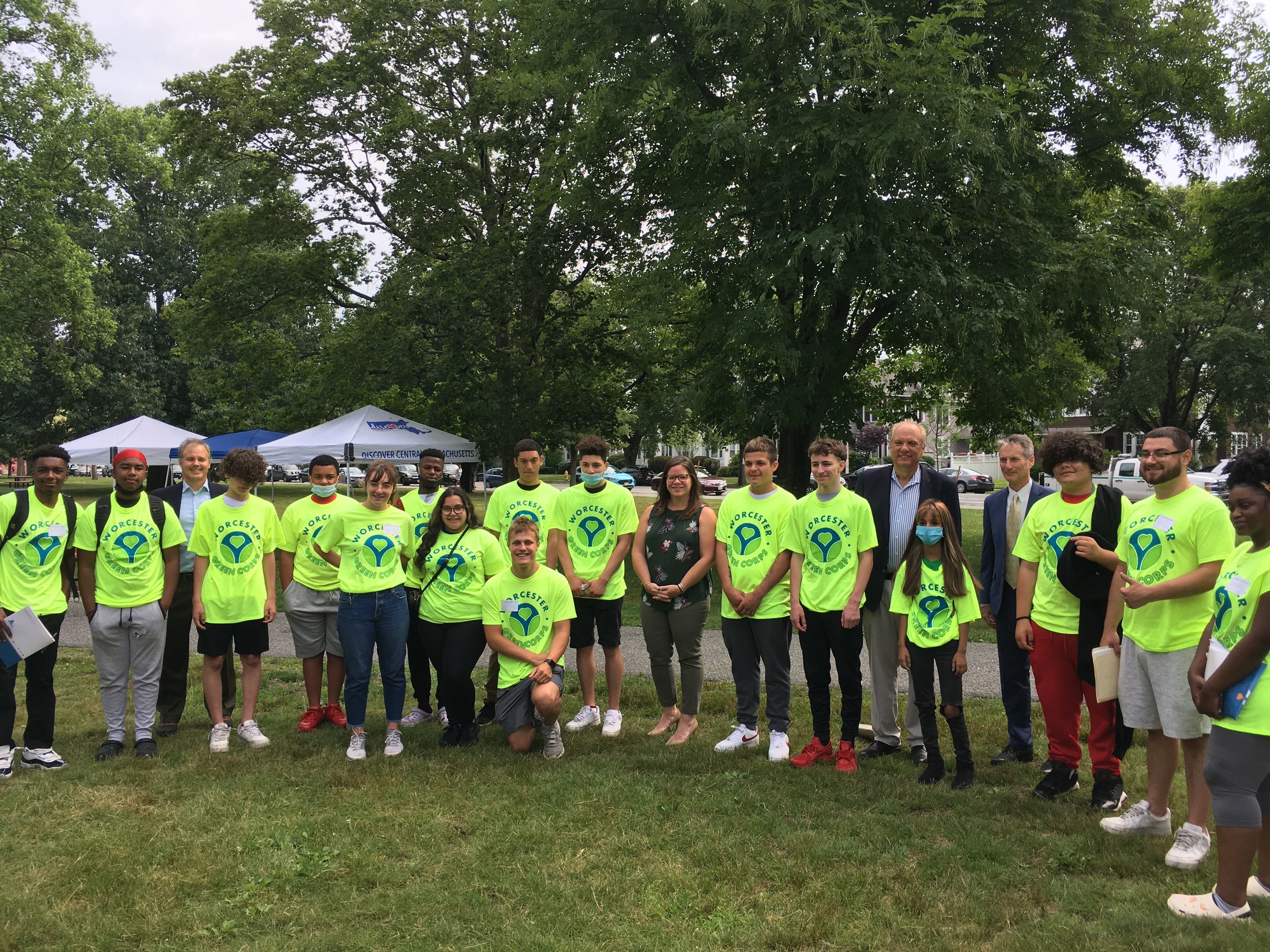 We’re excited to announce the launch of our newest and largest chapter—the Worcester Green Corps!

The Worcester Green Corps (WGC) is a partnership between the Worcester Regional Chamber of Commerce, the City of Worcester, the United Way of Central Massachusetts, and Keep Massachusetts Beautiful. The WGC formally establishes a year-round effort to leverage the business and nonprofit communities to keep Worcester clean, green, and proactive in implementing beautification and environmental best practices throughout the city.

In addition to year-round cleanup and beautification efforts, WGC provides a summer career pathways program that offers city youths a six-week learning experience via exposure to a variety of educational pathways and environmental careers.

As described in a recent article in the Worcester Telegram and Gazette, a group of 18 Worcester high school teenagers were honored for completing their participation in the city’s first-ever Worcester Green Corps. Each teenager received a certificate of completion, and local dignitaries such as City Manager Edward M. Augustus, Jr., were there to congratulate them.

Over a span of six weeks this summer, the Green Corps crew filled up 607 trash bags that totaled more than 4,000 pounds of litter. They targeted 137 streets from 18 different neighborhoods that spanned 31 miles of roadway and seven parks.

“All that trash lying in the middle of the street, and they picked it up. That’s insane to me,” said Miranda Hotham, the Worcester Green Corps director. "It gave the kids a sense of pride, and inspired people in the community that the city cares."

Augustine Mbokar, 17, a rising senior at North High School, was one of the 18 teenagers hired to join the Worcester Green Corps. As described in the Worcester Telegram & Gazette article, Mbokar said he didn’t like the work at first. “Embarrassing” was the word he used to describe his initial feelings of going around the city, with a bag in hand, scooping up litter. But six weeks later, his attitude changed. “It feels good. It was fun, I made friends, and I look forward to doing it again.” Mbokar said.

The teenagers were joined in the field by six college-age supervisors. One was Julianna Diliberto, 23, from Shrewsbury. “I’m really proud of all the kids,” Diliberto said. “It felt like we were doing something tangible and good for the city. People on the street would tell us we’re doing a good job. The neighbors were really grateful, and really happy about what we were doing.”

In addition to collecting litter, the Worcester Green Corps includes an educational component. Every Friday, the 18 teenagers met with local environmental experts to learn about career options, like water and waste management, urban farming, and alternative energies. Field trips to the city’s water filtration plant and a local waste-management facility were provided.

Learn more about the benefits of launching a local Keep Massachusetts Beautiful chapter in your community.